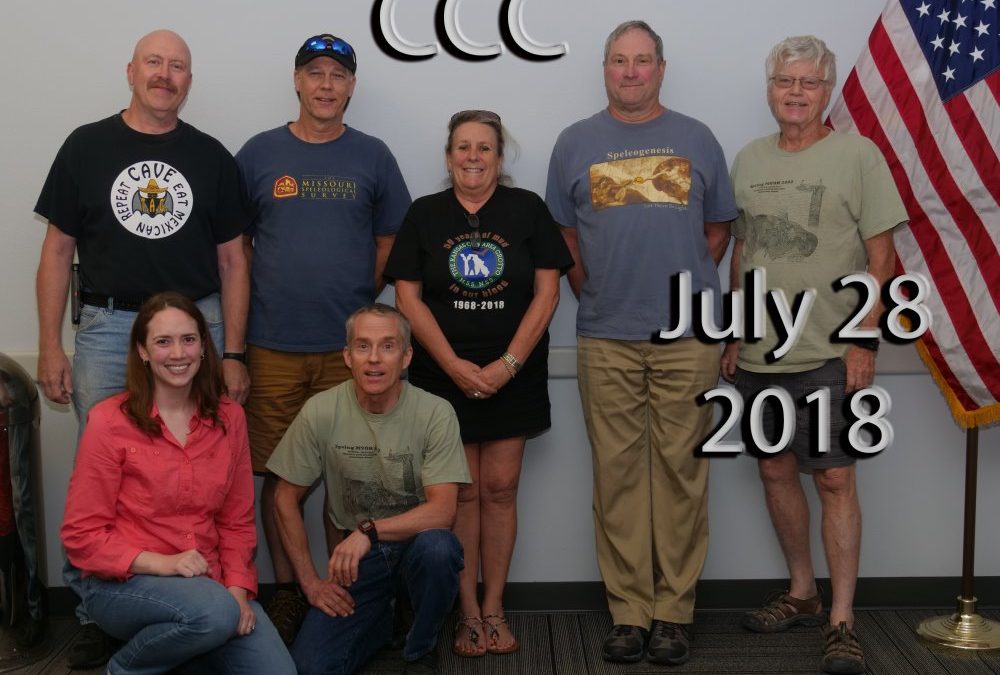 Rick Hines, Kristen Godfrey and Bill Gee arrived at the fire station about 11:50am. We set up the room and verified connectivity to the projector.

Meeting called to order at 1:20pm.

There were no minutes from the previous two meetings.

2012-2015 around $7k. Equipment purchases and declining membership account for the reduced balance.

Committee reports:
Biology (Bill Gee)
See related slide show. Carroll Cave hosts a fair amount of life. The population of eastern tri-color bats has been declining as shown by data from the bat census trips. Other populations have been steady. In spite of being in a white-nose positive county, we have seen no infected bats in Carroll Cave. This could be due, in part, to not looking close enough.

Dr. Ashley has retired from teaching and mostly from caving. He holds many years of data collected by his students. Bill Gee has asked several times for the data, even if it is not organized, but nothing has been delivered. He will ask again.

Bob Lerch reports that a recent survey trip (mid-July 2018) through the guano piles did not see any bats. The guano gauges showed signs of use, but there were no bats present.

Stream flow (Bill Gee)
See related slide show. Two major floods were seen in late April 2017. Only a few days apart. The level in Thunder River did not fully recede between the floods.

The best leads are in DL7. It’s a long ways out, horrible to get to. Trying to recruit some more surveyors but little success. No enthusiasm for a second entrance dig in DL7. Downstream Thunder River is VERY dangerous due to flooding.

Cartography – 3 sheets completely done, 3 nearly done. Remaining 5 are barely begun. Also need to resketch the T-Junction area. Something over half the cartography is done. The cave total length is roughly 20.3 miles.

Tom Loraine has asked for maps for the cave under the land where he has mineral rights. Ben Miller has been working that sheet.

Landowner relations (Rick Hines) – Rick has been working with Tom Loraine who is Chris Danuser’s atty. Deal to donate land around the silo and cave rights under Chris’s land is being discussed. Verbal discussion – donate three acres and we buy three acres. Also donate 40 foot access easement from road to tract to be owned by CCC containing the silo, also donate cave rights under about 450 acres. Loraine sent a draft proposed contract that requires a lot of work. Multiple tracts of land, none are very big. Asks for us to guarantee a tax writeoff value. Many blank lines, some stuff crossed out. Require 2 million dollars insurance. Cover letter said he hopes to conclude by end of September 2018.

The good news is we have something in writing and verbal commitments are made. Tom Aley has been retained by Tom Loraine to help establish a value for tax purposes. Rick has talked with two other attys – Bill Kacerovskis who wrote our release and is now involved with MCKC, and Peter Chulick who drafted documents for Berome Moore acquisition. Rick has put Loraine and Peter in contact with each other.

Rick thinks something will get done but maybe not by September. The big issue is us guaranteeing the value of the donation. Having Tom Aley involved is good.

The proposed contract mentions $3k per acre, but that is not certain. Surveyors have not provided final data yet. We need legal descriptions. Why multiple tracts?

The package emailed to Rick from Loraine includes two real estate contracts. One is Rusty Clark.

Ron Jaeger has said he will cover the cost of purchasing land up to $9K assuming it is done concurrently with a donation by Danuser of and additional three acres and the donation of cave rights under about 450 acres. Rick says we can count on Ron. Several land sales have occurred. We think the silo area has not yet been sold because we have never been given the opportunity to purchase it under our right of first refusal.

Next step – Rick will work with Loraine and the MCKC attorneys to help clean up and finalize the documents for the 501 c3 donation and land purchase.

Rick has talked to Jerry Pemberton who is now running the family business. Jerry has purchased 90 acres on Poverty Mountain so now owns more of the cave around natural entrance.

Once we have cave rights from Danuser, that will help set a value for the rights. We will then ask Greg Fry to donate cave rights under his land which he has promised to do. Then Rick will approach Jerry Pemberton and other land owners for donations of their cave rights.

Ballots were collected. Pic Walenta tallied the vote. The result was unanimous –

Jeff and Bob Lerch discussed getting the bank account changed over.

Jeff Page – Membership. The policy is a bit confusing. Membership starts Jan 1, but late year signups only get a few months. Jeff proposes making membership start from when you sign up. Consensus is that Jeff can make that decision. It will not be hard to implement in the database. Officers concurred with the idea.

Web site changes – Marty Griffith has pretty much stepped out. Bill Gee has all the passwords and access information now. He will take over the site.

Other topics from Rick: Rescue, access and trip leader training procedures need to be updated.

Jeff discussed some joint training projects with the MCFPD training chief. Jeff would like to work something out with them. People change over … Does MCFPD have information about the trip permit box? Etc.

Discussion about Yahoo Groups email lists. Should we have members see board discussions email? Should we move to something other than Yahoo Groups? Should deliberations be public? How do we prevent everyone from voting when only board members should vote?

Bob Lerch volunteered to be our MSS rep, at least for one or two meetings.