In 1994, Crystal Caverns was in its 65th and final year as a show cave operation. The entrance, enclosed by a small gift shop and administration building sat within a heavily forested area that stretched for many acres, north, west and east of the parking lot. The setting was idyllic and the cave entertained countless tourists and other visitors over the decades. For many years of its operation, Crystal Caverns was the most prominent tourist attraction in the Cassville area.

A Former Show Cave Gets a Second Chance

By early 1999, all surface structures on the property vanished, along with the water supply and electrical service. Only a concrete slab and entrance structure remained. The concrete block entrance that contained a stairwell into the cave was overgrown with vines, was secured with a dubious lock and chain on a rickety steel door and looked like a lone outpost in a war zone. The trees around the entrance had been crudely logged, leaving tree segments, tree tops and lots of brush among the stumps. Logging equipment also partially damaged the entrance passage into the cave. The cave was in such dire straits, the absentee owners considered it a liability and made plans to bulldoze over the entrance and close the chapter on Crystal Caverns. Then, as chance would have it, the late Ron Parmer, a Missouri State mine and cave inspector, called MCKC member, Dwight Weaver to see if the MCKC would be interested in the cave. Effective May 1, 1999, the MCKC began leasing the cave and 160 surrounding acres.

In the years following, the old corroded lights and wiring were removed from the cave and some old worn handrails were replaced. The vandalized door to the man-made entrance was replaced twice and other improvements were made.

Bob Taylor was summoned to survey the cave, amassing some 2,000 feet of mapped passage. It was not until 2016 that the survey (2944 feet)  and map were completed. Besides being one of the longest mapped caves in Barry County, Crystal Caverns has an overall depth of about 100 feet from top to bottom. While Crystal Caverns does not have large speleothems, it does have a treasure trove of small cave formations. Translucent soda straws and small stalactites adorn many areas. Crystal Caverns is most noted for an impressive display of aragonite crystals with extremely fragile needle-like growths.

The cave is also noted for its pure white stalactites and the impressive speleothems that adorn the Queen’s Attic. The Fossil Room, contains beautiful speleothems in one area and is known for its fossil-rich ceiling of Burlington limestone. Among raised relief of crinoid remains are brachipods and horn corals. Beyond the Fossil Room, through a low, muddy, belly-crawl lies the Enchanted Forest, a small room with the cave’s largest, most spectacular flowstone and a profusion of delicate soda straws, helictites, calcite wings and columns. 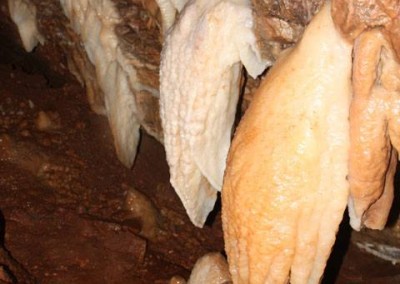 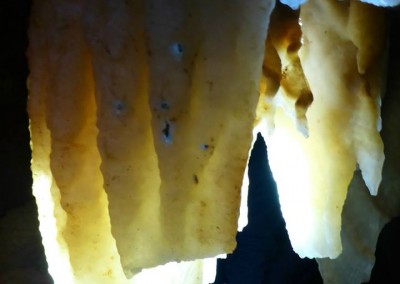 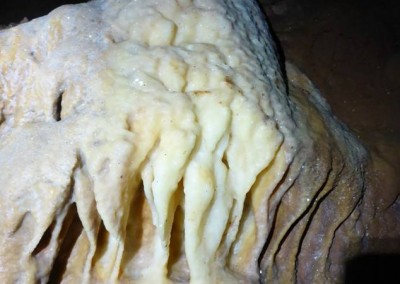 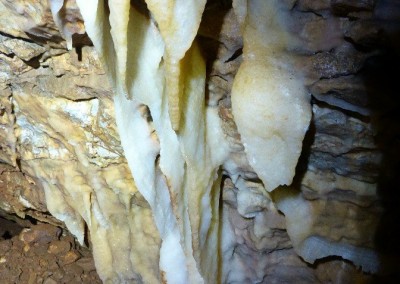 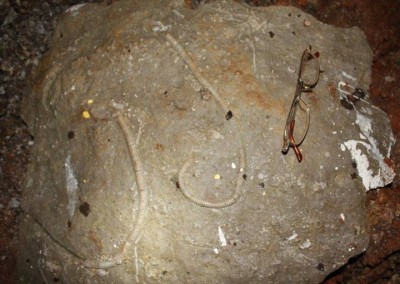 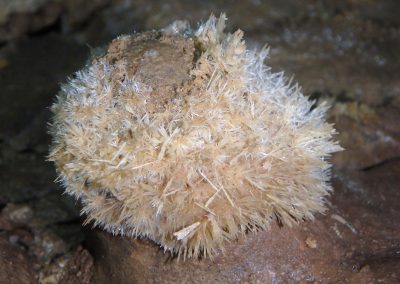 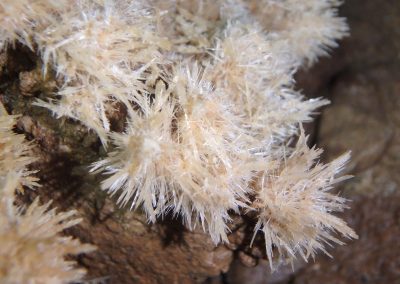 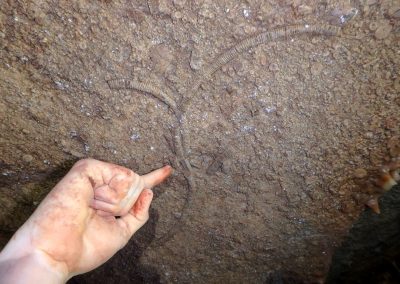 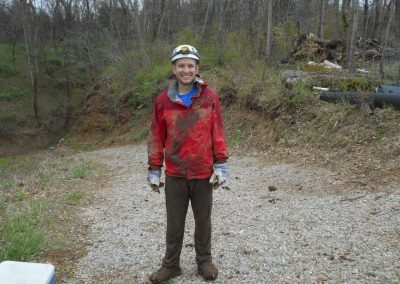 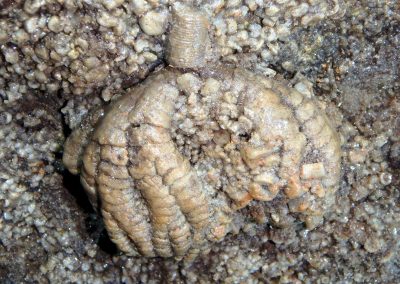 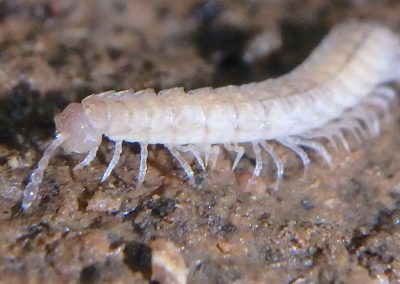 An Active Ecosystem in Crystal Caverns

Despite being a nearly sealed cave for several decades, the cave does have an active ecosystem consisting of troglobitic springtails, diplurans, spiders and millipedes. including polydesmidan millipede. All species of polydesmidans are blind and have white larval stagesm but will become more or less pigmented as adults.  They can be common forest dwellers, and can be found in caves. Crystal Caverns also has a few cave salamanders that live in its entrance passage. The cave has been used as an educational resource since MCKC began its stewardship more than a decade ago.

In March 2015, trespassers pried open locks, entered the cave and vandalized many sections of the cave causing ireparable damage to delicate aragonite crystal formations and other speleothems. >> More

For more information about Crystal Caverns, or to request a permit to visit the cave, email the cave manager at crystalcavernscm@mocavesandkarst.org.