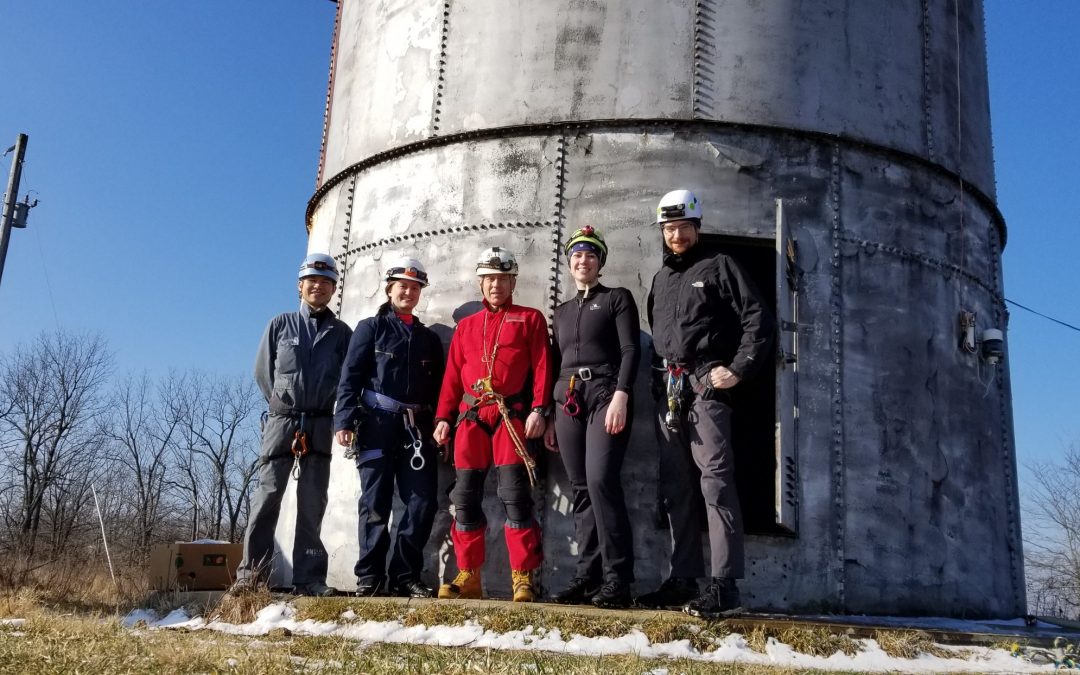 The normal annual bat census trip in Carroll Cave is run in late October. Last year (2019) the trip almost did not go due to lack of participation. We wound up doing a partial trip with only three people. That trip only went as far as the Lunch Room. We documented the state of the guano gauges but did not get to count any bats.

I scheduled a make-up trip for early February. The make-up trip skipped documentation of the guano gauges but otherwise was the same as the normal October trip.

Seven people signed up for the trip, but in the end only five attended. I drove to the silo Friday afternoon. I had some snowflakes on the way, but the roads were clean and dry. The gravel trail needs some work. the field was really soggy. Even with 4×4 I had trouble getting over to the power pole so I could plug my camper in. I called Seth Colston and let him know about the roads, and asked that he send an email to everyone telling them to park on the gravel trail.

I grabbed a piece of angle iron and cut some channels so the major soft spot on the gravel trail could drain a little bit. It wound up taking about half the water out of the ruts, but the field was still draining and so the trail never did get dry.

The field was really soggy from rain and melted snow. There were standing puddles everywhere. Perhaps it is a good thing the skycrapper is not yet operational! There was a major puddle all around it. Waterproof boots would have beenrequired to wade over to use it.

Seth and Kristen arrived at the silo sometime late Friday. I was already in bed so did not hear them arrive. I was up early Friday for some walking. The temperature was about 25F which froze the top layer of both the field and the gravel trail. The soft spots had a layer of ice, but nothing solid enough to drive on.

Everyone arrived at the silo by 9:00am. Hou and Morgan parked on the gravel, and Seth moved his car over to the gravel. We all geared up and started entering the cave by 9:40am. Judging by the sound, Thunder River was running a bit high. The shaft was raining harder than usual.

Our first stop heading down the Carroll Passage was the Rimstone Room. We paused for a few minutes to admire the formations. From there we went through the Water Barrier to the first riffle. We looked for isopods but did not see any. It was not a formal count and we only turned over a few rocks.

The next stop was the first set of guano piles. One of our goals for the trip was to get a measure of the size of the piles. I brought along a DistoX2 to make measurements. It is much easier to carry than a tape measure. Morgan stood on one side of the piles with her back to me, and I took a reading from the other side using her back as the target.

After measuring the size of all the guano piles, we moved on to the Lunch Room for a meal break. The ceiling waterfall in the Lunch Room was running, though not at full speed. We left the Lunch Room about 12:30pm to start the formal bat count.

As usual it was slow going for the first 3000 feet. Dealing with slippery, boot-sucking mud just slows things down a lot. For the entire trip to the Mountain Room we saw a total of three bats. There were more salamanders, and we saw a dead surface fish on a mud bank. The formations were as awesome as usual. Many of them were wetter than normal. I noticed some that normally have drips, but for this trip the water was running in a constant stream.

After a snack break I went around and measured all of the guano piles. Kristen, Seth and Hou volunteered to go down the water passage toward the entrance looking for bats. While they were gone, Morgan and I took an inventory of the rescue cache. Everything looks fine, except the cigarette lighter did not work. I put it in my pack to bring out of the cave. I think we need some more reliable way to make a flame to light candles.

Seth, Kristen and Hou were only gone about 15 minutes. They reported seeing no bats at all. They got to a point where there was only 6 or 8 inches of air over the water. I think they made it all the way to the Neckbreaker which is about halfway to the natural entgrance. If there are any hibernating bats, they are between the natural entrance and the Neckbreaker.

We left the Mountain Room for the return trip at about 4:10pm. 20 minutes later we got to the ladder up to the Turnpike. A short break to put on knee pads, then we started through the muddy mess that is the Turnpike. It took right at 30 minutes to get through to the Lunch Room. We were seriously slimed up when we got through.

We kept on moving. At the Water Barrier we paused for ten minutes to rinse and clean as best we could, then continued on to the ladder. When we got to the shortcut to Thunder Falls, Morgan decided she would rather leave that site for the next trip.

Everyone geared up. I climbed the ladder first and everyone else came behind. We were all out of the cave by 7:15pm. It was about 40 degrees outside, not terribly cold but enough to make everyone VERY interested in getting out of wet clothes!

I was the only one who spent Saturday night at the save. Everyone else drove on home. The overnight low was supposed to get into the low 20s, but in the event it did not freeze. The temperature was steady around 45 all night. It rained briefly which caused me to get up and move my truck and camper to the gravel.

Miscellaneous –
Fish in Water Barrier about 50mm
10cm salamander on guano pile 1. One fish in the stream 40mm, downstream from guano pile 3 about 20 feet.
Lots of salamanders around guano pile 6. At least 8 or 10, length 10cm to around 15cm. A whole family of them!
Two salamanders at piles 11 and 12. 12cm length on one of them.
A fairly fresh bat skeleton on top of guano pile 15. It was too large to be a pip, Indiana or grey. We figure it might be a big brown.
Lunch Room – dead ringneck snake in the mud 8 or 10 inches, and one cave fish in the stream about 7cm.
At entrance to Mountain Room – In the stream – A large sculpin, 8 or 10 inches. A dead frog, and a dozen live frogs. Several surface fish, species unknown. Probably perch or blue gill.

Inventory of rescue cache:
50 foot of 550 paracord
roll of trash bags
A box of 15 votive candles – 1.5 inche diameter, maybe two inches long
Cigarette light in ziplock.
Two pencils and some Rite-In-The-Rain paper in a ziplock.
6 pieces of closed-cell foam pad.
The cigarette light did not work.