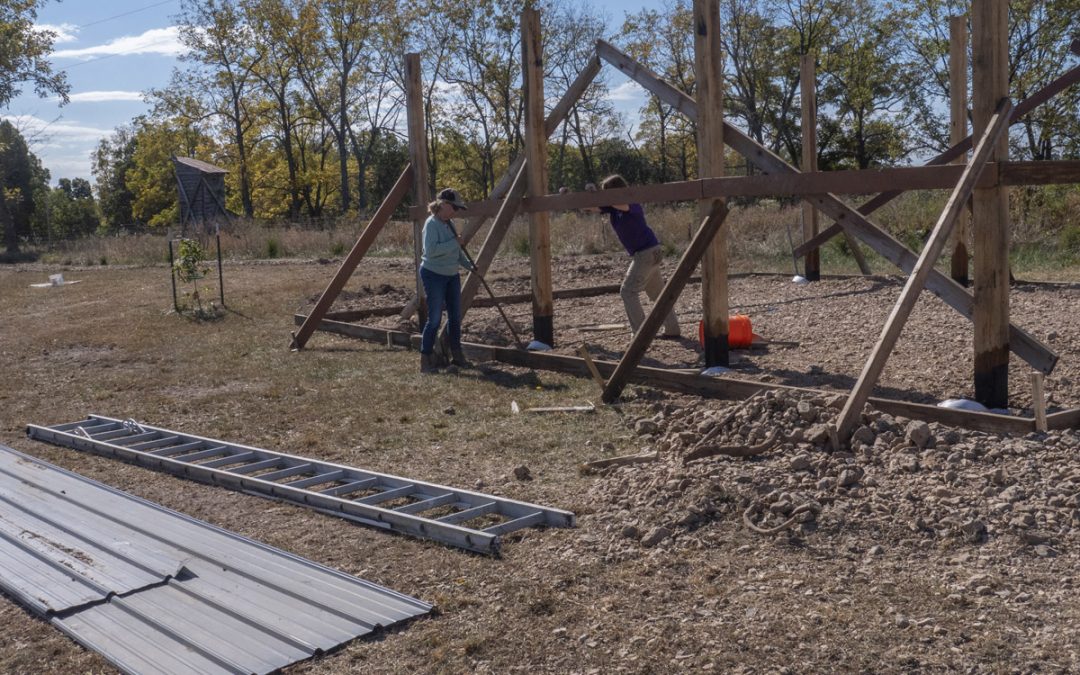 I was hopeful that we would be able to get the Pic Walenta memorial shelter ready for pouring concrete, which was accomplished.

I drove down Friday afternoon and picked up an auger attachment for a skid steer and a 12” auger from A-B rental in Camdenton so that it would be ready when Jake and his skid steer arrive Saturday morning. When I arrived at the silo I was pleased to see that the gravel had been delivered Friday morning as promised so we were ready to go to work Saturday.

Saturday morning everything was covered with a heavy frost and the temperature was 31F. Rusty’s longhorns were nearly hidden in the dense fog.

Marty Griffin and Krista Bartel arrived early to help. Jake arrived on time with his machine. He unloaded the auger from my pickup, hooked it up and started drilling. He made quick work of the eight 3’ deep post holes. It looked like we had plenty of gravel so I had him strip the sod and level the ground where the concrete pad will be. He spread and compacted the gravel so the surface of the concrete pad will be well above the ground level. When Jake thought he was close to level we check his work with my transit and found it was within an inch. He made some final adjustments and then moved on to trying to grade out the sod and dirt he had removed to the low areas toward the sky crapper. The clumps of sod could not be graded out so I had him waste the dirt in the low swampy area toward the fence. With a little time left on the clock before our $300 minimum was reached, I had him clean up the last of the gravel and build a path from the back of the shelter house to the sky crapper and between the shelter house and the silo. I paid Jake and about that time Joe Muscia, the gravel man showed up to collect his pay.

While Jake was finishing up, Krista, Marty and I started working on getting the posts ready to place in the holes. We drilled two perpendicular 5/8” holes 30” up from the end of the post and drove 24” sections of rebar, which I cut at home, in the holes. The plan was to suspend the posts in the holes so that they could be more easily aligned and so the concrete would encase them. That didn’t exactly go according to plan but with a little prying with a big bar we eventually got the post close to the correct location.

We needed to return the auger to A-B rental in Camdenton and I needed to pay Tony Clemons for the posts and lumber before 2:00 PM. We packed up and headed to town to return the auger and get lunch. Before returning to the silo we drove to Tony’s sawmill and gave him a check for the lumber. He said he could cut additional siding boards for us if we need more.

When we returned to the silo we continued working to get the posts positioned. We screwed temporary 2x6s around the perimeter to fix the distance between the post as per the design. We then got each post plumb and held in place with temporary diagonals staked to the ground. Krista and Marty needed to depart but Krista was staying in the area and would return Sunday.

After picking up tools and organizing a bit, I made dinner. While eating I thought of a few things we needed for work Sunday. I call Rita and asked her to bring a string to help align the posts and asked Krista to try to get some stronger stakes. I had made a bunch of wood stakes at home but they were not sturdy enough for the very hard ground. I contacted a few local landowners. I planned to see Greg Fry on the way home Sunday. As the sun set, I started getting ready for another cold night. I set up my cot/tent in the silo and put on a second pair of socks.

Sunday morning was again frosty. Krista arrived first and found me sitting in my truck with the engine running, eating oatmeal and listing to the news. We were soon measuring and checking level for placing 2-bys for concrete forms. In some areas, we needed to dig a ditch to set the forms, and everywhere we struggled to hammer in the stakes. She had purchased some stronger stakes and they worked better than mine but we still shattered several with my eight-pound sledge. Rita arrived and we finished the last of the forms. We used the string she brought to fine tune the position of the posts.

We cleaned up the site, locked up the silo, and loaded my tools. The girls headed to El Caporal’s and I agreed to join them after a brief visit with Greg. After an excellent meal and a Margarita, we all headed home.

As soon as I can confirm a date, after the 15th, with my concrete guy, I will set up another work weekend to pour the slab. I’ll purchase rebar and will get it done. On following work days we’ll finish the framing and install the roof. An attach shed for a lawn mower may follow.

Thanks to the locals; Jake, Joe, Tony, and Troy that helped and thanks to Marty, Krista, and Rita for helping.