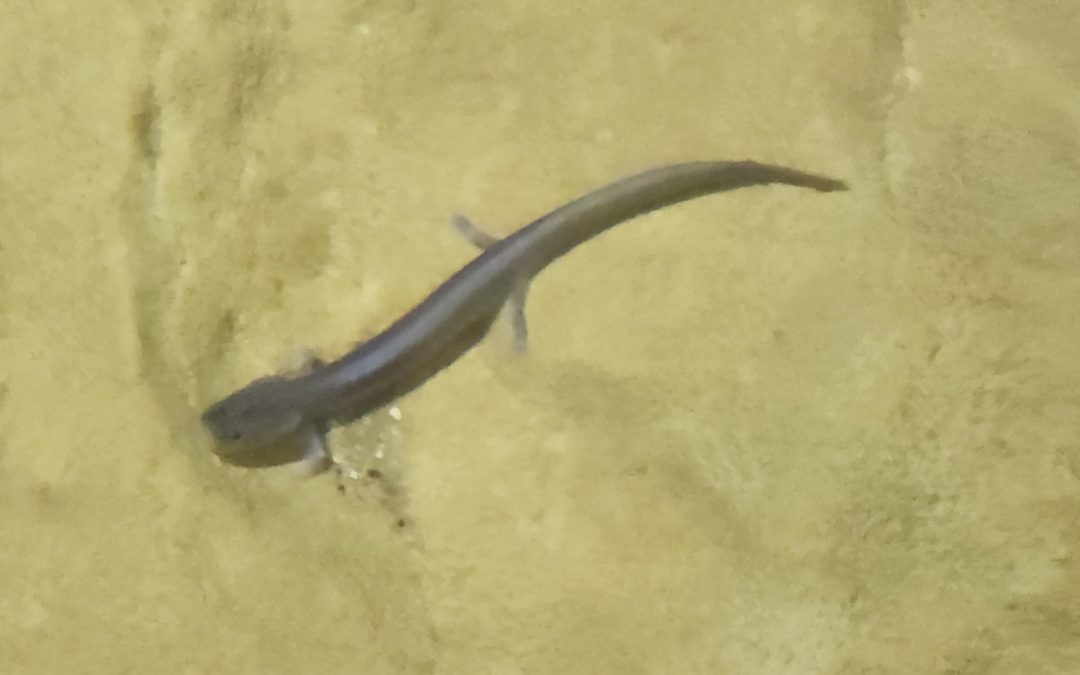 This is a regular trip taken in early January to download data from all of the stream flow data loggers in Carroll Cave. Along with data collected in July, a set of full-year graphs is generated showing rainfall activity and changes in the stream level.

Nathan and I drove to Carroll Cave early Saturday morning. We arrived at 7:45am. On the drive we went through a few sprinkles of rain, just enough to require a few swipes of the windshield wipers. The temperature was a few degrees above freezing, so I was not worried about slick roads.

We found gate at the road was properly locked with the two padlocks chained to each other. At the silo we unlocked the cave and installed the rappel rope. I then tried to download data from the rain gauge logger. It did not work even after several attempts. I gave it up with the intention of trying again after we left the cave.

Looking around the site, we saw no issues that need to be handled. The concrete for the pavilion has cured nicely. The roof trusses are not under a tarp, but they do not seem to have suffered any damage.

The Kovacs arrived about 8:45am. Everyone geared up. We had a minor problem here because the bucket of cable sleeves was gone. Fortunately I found two cable sleeves attached to some full-body harnesses. We only needed two – one for Candace and one for Chloe. I think Rick Hines has the bucket of sleeves.

The first person went down the rope at 9:10am. We were all in the cave by 9:30am. The shaft was raining, but somewhat less than usual. I downloaded the two loggers at the ladder.

Since this was a small crew and everyone had been in Carroll Cave before, I decided to let some of the other lead for a while. The best way to learn the routes is to lead. If you are not in the lead, then the view never changes! Candace took the first leg, leading down Carroll Passage to the data logger at the Rimstone Room. She did a good job with only minimal guidance from me.

We arrived at the data logger a few minutes before 10:00am. I did the download and then we started back to the ladder. This time Mike took the lead. We were back at the Thunder Falls shortcuts by 10:30am.

It was too early for lunch, so we decided to go download the Thunder Falls data logger. Chloe missed seeing Thunder Falls on her first trip, so this was a new site for her. The water level was running a few inches below normal. I downloaded the data logger, then we returned to the ladder to have lunch.

After lunch we continued to upstream Thunder River and the UL2 side passage. We left the ladder at 11:40am. Nathan took the lead for this leg. We arrived at the UL2 data logger about 12:20pm. I downloaded it, which completed our list of tasks for the day. We were running way ahead of time, so we decided to do some fun caving.

We continued on to Convention Hall. Everyone except Chloe had been there before. From there we went on to the Conference Room. That was new cave for everyone but me. Leaving there, we returned to the main Thunder River passage. There was still a lot of time, so we went upstream to the Round Room. This time I led the way. Nathan had been there before, but it was new cave to the Kovacs. I pointed out the entrance to UR1 and Flat Rock Falls as major waypoints.

We arrived at the Round Room at 1:45pm. We had a snack and chatted for a bit, then started the return trip. Nathan’s main headlight came apart, so he switched to a backup from his pack. The backup was plenty good enough to get out of the cave. We arrived at the ladder at 2:55pm. Everyone geared up and climbed out. Last person out of the cave was at 3:15pm.

I took one more stab at downloading data from the rain gauge. This time it worked. I do not know what changed.

We saw a few fish in Thunder River. As usual, we saw more and bigger fish in UL2. The fish count in UL2 was about 12 or 14. We also saw a juvenile salamander in UL2 which still had some pigmentation. Candace got a photo of it. We turned over a few rocks looking for isopods. Several were seen. Chloe had never seen one before.

After changing clothes we all went in to Camdenton for a slightly early dinner at El Caporal Mexican restaurant.

The data that we collected will be analyzed and presented in a separate report.