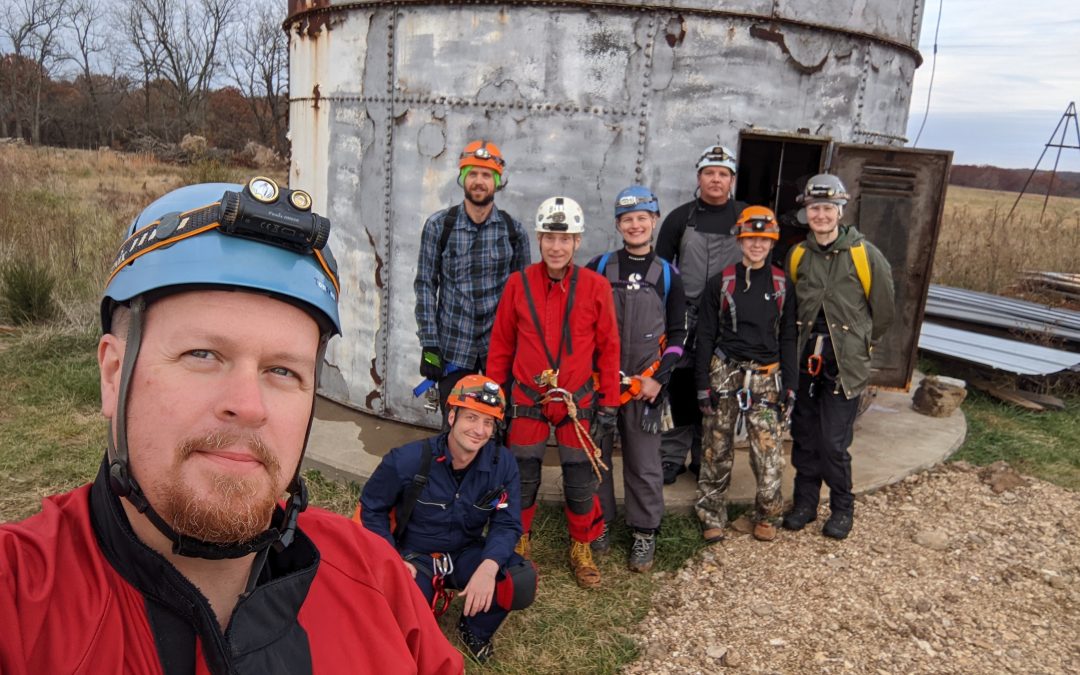 The annual bat census trip in Carroll Cave takes place in late October every year. For the last few years we have found very few bats and quite a few sculpins. Perhaps it should be called a sculpin census. This year was no different.

Most of the participants arrived during the day on Friday to help out with work on the campground pavilion. The Kovacs came in Saturday morning. There was a survey project trip planned for the same day. The three people on that team arrived Saturday morning . They geared up and were in the cave shortly after 9:00am.

By that time we were all ready to go. As soon as the survey team was in the cave, we started in. That was about 9:30am. We were all in the cave shortly after 10:00am.

Since there was only one rope, we coordinated with the survey team on how to handle it. It was my rope, and I planned to camp Saturday night. The survey team was not going to be out until well after us. The arrangement was for us to leave the rope in the shaft when we finished our trip. The survey team would haul it out of the shaft and pile it in the silo when they returned. Among other things that would be our indication that they were back.

The first part of our trip went rather fast. We arrived at the isopod riffle about 10:45 after going through the Water Barrier. The isopod count took 20 minutes and then we moved on. The gauges on the guano piles were all photographed and described, and then cleaned off to reset them for the next year. The gauges showed the usual pattern of usage. The guages on pile 15 were almost completely covered to a significant depth.

At the last guano pile there is an Anabat Roost Detector which is on loan to us from the U.S. Fish and Wildlife Service, courtesy of Vona Kuczynska. One of our tasks was to change the batteries and memory card in the roost detector, and also to upgrade the firmware in it. We tried to upgrade the firmware in March when we moved the roost detector from the Mountain Room to the guano piles. That attempt failed because we did not have the right USB cable. The batteries and memory card are easy. The firmware … There were some challenges.

For this trip I made sure we had the right USB cable. It requires a cable with a right-angle Mini-B connector on one end. There is not room in the case for a straight-on connector to fit. Upgrading the firmware requires a computer. Martin generously stepped up to carry the laptop. It was in a Pellican case for protection. Martin wrapped in in a big plastic bag as well, and then put all of that in a backpack. It fit just right in the backpack.

The firmware upgrade process took some time, mostly because the software is not easy to use. A special driver has to be installed in Windows, and that cannot be done until the roost detector is connected. The driver installation process did not work the first time because of a file name mismatch. I corrected that, and was able to get the driver to install. After that the firmware upgrade process went smoothly. The whole process took about 15 or 20 minutes.

While I was working on that, the rest of the group went on to the Lunch Room which is just a few hundred feet away. I finished the upgrade, shutdown the laptop computer and put it back in the Pelican case, then joined the rest of the team for lunch. We were all in the Lunch Room about 12:30pm. Martin found one juvenile salamander about 40mm long in the stream.

After we finished lunch, Martin and Sarah decided to turn back and exit the cave. Martin picked up the computer and carried it back with him. They did not wait for us once they reached the surface.

The rest of us left the Lunch Room about 1:00pm to begin the bat count. We count bats from the Lunch Room to the Mountain Room going along Carroll Passage. This is very muddy passage which is highly decorated for much of its length.

When we got to the Paradise Passage entrance, we had a surprise. The survey team was coming out! They had decided to take a side trip to see the Azure Pool. We waited for them, reviewed plans, and let them go on ahead of us.

We encountered the survey team again when we got to the Turnpike ladder. They apparently had a problem with one of their headlamps. They were just about to take off when we got there. Once again we let them go on ahead of us.

The bat survey found in total only two bats, both eastern tri-color. Before white-nose really set in, we would often count over a hundred eastern tri-color bats along with several small clusters of grey bats. This year we saw none of them. We did see numerous sculpins in the stream. Most were very emaciated and near death. They hardly moved when we shone a light on them.

In past years we have seen a cluster of several hundred bats just upstream from the 500 foot marker. This year there were no bats anywhere to be seen in that area. The stream bed had a thick coating of guano, so bats have probably been there recently. We saw two surface crayfish at that place in the stream. Mike Kovacs got some good photos of one of them.

We arrived at the Mountain Room about 3:30pm. I went around the room photographing the guano gauges, none of which had anything on them. I saw a pickerel frog near gauge 33. The others looked around in the stream. We had a snack break, then went over the hump into the biggest part of the Mountain Room. The survey team was there doing their final preparations for getting into the water passage, which was their original goal.

We left the Mountain Room about 4:30pm. The trip to the Turnpike took about 25 minutes. We paused there for everyone to put on their kneepads, then proceeded up the ladder and through the Turnpike. It took right at 30 minutes to get through to the Lunch Room.

From there we kept on going. By this time Chloe Kovacs was runninig out of steam, so we slowed down a bit. We were back at the ladder by 6:30pm. Mike, Candace and Chloe stayed there while I took Justin and Jarrett on a quick trip over to Thunder Falls. They were both new to Carroll Cave, so showing off the waterfall was required. The stream level was fairly low in spite of three inches of rain earlier in the week.

Back at the ladder, we all geared up and started climbing. I went first so I could help everyone get off the ladder at the top. On the way I grabbed a temperature data logger that I place the day before as part of a research project by Tyler Huth.

We were all on the surface by 7:00pm. As previously arranged, we did not pull up the rope or lock the cave. Everyone changed to clean clothes. Jarrett and I camped overnight.

Sometime very early Sunday morning, around 2:00am I think, the survey crew came back out. I was up early for the drive home. At 5:00am I found my rope piled up in the silo. I grabbed my safety tethers from the basement, then locked up the basement hatch.

On my way out of the property I had to rearrange the locks on the gate by the road. Someone had left the locks both snapped, but with a piece of wire in the chain such that the gate could easily be opened. I took out the wire and arranged the two padlocks so that unlocking either of them would open the gate. We probably need to do some education on how those locks are supposed to be arranged.

Guano gauges:
Guano gauge 1 = 80% 4mm The pile has fresh guano over the entire area. White spots of fungus on the pile but no threads.
Guano gauge 2 = 40% 2mm Fresh fungus threads on the guano gauge
Guano gauge 3 = One small spot about 1cm diameter, just a film.

Guano gauge 4a = Dusting, five turds, the rest is a film. 5% coverage, no depth
Guano gauge 4b = 15% 2mm and some film. The pile shows activity across about half of the pile

Guano gauge 5 = One small turd, really just a film.
Guano gauge 6 = 40% 2mm Most activity on the pile is away from the gauge

Cave fish at the first sloppy mud crossing, about 35mm.