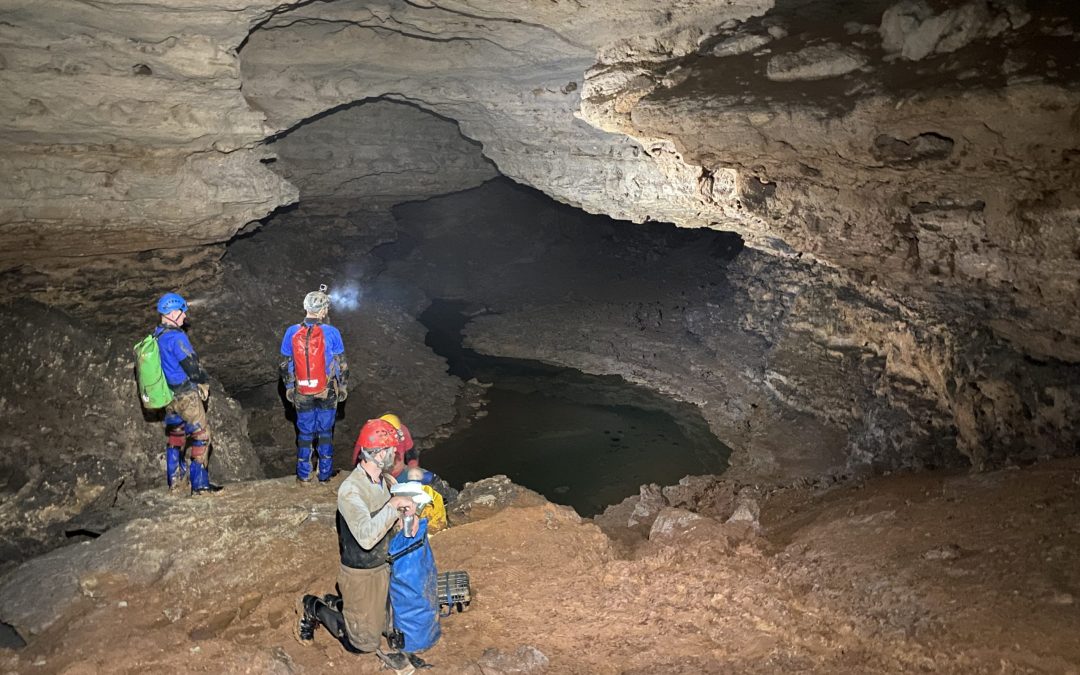 Trip participants: T.Schmitt, Josh Hafner, Corey Ellis
Entry Time: 10am
Exit Time: 11pm
The trip report: My crew, one of five in the cave traveled from the backdoor to the mountain room. We traveled with Lamping’s team which should be covered in his report. We bypassed the turnpike on the way in as several of the people on our teams had never been in the cave. We did take the turnpike on the way out. We took our time heading towards the MR and got there in just under three hours. Our objectives were to get Josh’s drone up into a dome at station MR8 (C167 on line plot) and check a couple of side passage loose ends near there. If that didn’t pan out we were to assist Dans group in surveying leads off of the entrance water passage. I should mention Chads group was also in that arm of the cave to get into and survey the upper lead that goes above the mountain room. That should be covered in Chads report.

The drone worked out and we were able to say that there is no going passage up there. We packed that up, which in all took about an hour and started looking into the side passages near the same station.

We used MR8 as the tie in and shot up into a side that required a short climb (about 6′) to get into. The passage was dry mud floored, and averaged about 2′ tall. I was on book, Corey on lead and Josh doing backsites. We used the BRIC 4 survey instrument from MVG. Our survey designation was CT.

In all we surveyed 10 stations for 172′ of survey. I could not fit to the very back room, so Josh took over book duties on the last few shots. Interestingly there were old carbide dot survey stations in there. During the period when I could not fit, I went back out to main and heard Chad yelling for someone to come over to them. I walked down stream a little bit and saw them about 40′ up in the ceiling. I was able to find a station and they were able to take several disto shots from the end of the upper passage and tie into what I believe was MR3 (C172 on line plot). I then went back to wait on my crew.

Josh and Corey soon showed up, we had a quick lunch and then headed onto the next side. The next side was directly below the CT survey on the same wall. It was more of a meander/ cut around, but we managed about 80′ of survey out of it. Survey designation for this area was JT. We packed up everything and headed into the MR proper to see how Dans team was getting along.

We found Jeff Fennell in the mountain room with a stove going. He had to bail on them as he had gotten too cold. Dan and Ben were still at it, so we all hunkered down to wait. We waited about an hour and a half and they soon showed up. We had hot water ready to go for them so they could eat a hot meal. After they ate, we packed up and headed out.

We took the turnpike going out and made the bottom of the ladder around 10:30. I was on the surface right at 11pm. The mountain room is now complete. The only thing left to do down there is a couple more side passages off of the entrance water passage. Dans team resurveyed that in a effort to leave good tie ins for a future trip. This was a great effort considering they had to don wetsuits and go for a swim. After everyone got on the surface Bob ran some quick numbers and we realized we had hit 21 miles. I had two rum and cokes in celebration and slept like a log.

We saw only two bats flying, that was right around dusk. There were no bats around the guano piles. We did see a couple of sculpins, a big crayfish and what looked like a bass in the mountain room area. They all looked terrestrial.

Editor’s note: Corey Ellis provided the photos on this post. More of the photos he took on this trip are on https://photos.app.goo.gl/pjBrGFyxQx1kw3xV7 The set also includes some short videos showing Josh Hafner flying his drone in the Mountain Room.