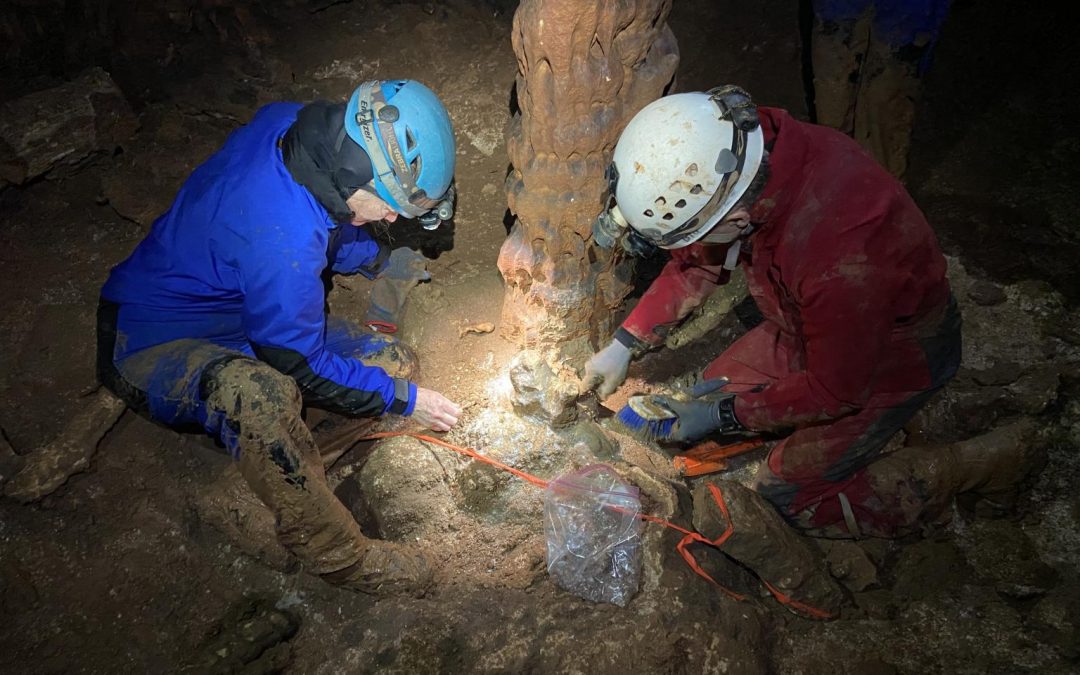 This trip is a prime example of how goals and plans can change even at the last minute. The original plan had been to run a biology survey and rescue cache service trip to far Upper Thunder River. We were going to have two trips in two days.

When we all got in the cave on Saturday, the day before this trip, we found that the level in Thunder River was about a foot higher than normal. That would have made a long upstream trip very difficult. As a result, we changed plans Saturday night! The resulting trip was completely different.

For the revised trip we established three goals. One was to clean up (Finally!) the carbide dumps in the Rimstone Room. Second was to rebuild the rock wall that marks the trail around the Giant formation. Third was to perform some testing of the cave intrusion detectors by placing them in various hiding spots and seeing if they would pick up passing cavers.

Seth, Kristen, Nathan and I camped overnight. Rita and Grace made a day trip of it, arriving about 8:15am. We all got geared up and were in the cave by shortly after 9:00am. I placed one of the cave intrusion detectors near the ladder, then we left for the Rimstone Room. I also lowered the stainless steel “appreciation” plaque to the bottom of the shaft. It is now leaning against the cave wall under the Mike Roos plaque.

It is a fairly short trip to the Rimstone Room. We were there in about 20 minutes. I brought a trowel and some ziplock bags. We all took turns at the various carbide dumps. Three of them were obvious, but we found several more. We scooped as much of the spent carbide into bags as we could, then spread dirt and mud around to cover up what was left. The soft brush that normally lives in a bucket under the shaft proved to be very useful though a bit too big for some of the small cracks and crevices.

We left the Rimstone Room about 10:30am. At the Giants formation we gathered a bunch of rocks and reset the patch through the area. We found a lot of flagging tape that was scattered around. That was used to mark the tops of the rocks in the wall. Kristen pored some clean stream water over one of the formations to clean off a muddy hand print. She also wiped the general area with her hands to erase foot prints.

We got back to the ladder about 11:30am. After everyone had lunch, we discussed plans for testing the cave intrusion detectors. Nathan decided to head on out since that would give him time to get home and attend an event with his son. Rita and Grace also decided to go on up.

Seth, Kristen and I set one of the cave intrusion detectors in several places around the ladder. We determined that it can detect the rope light if pointed directly. The rope light is very dim, so putting the detector in a hiding hole caused it to not trigger. We found a place under a rock next to the trail that leads to Carroll Passage. Testing showed that the detector will trigger on passing caver lights and yet is well hidden.

We went a bit further down Carroll Passage to the formations near the shortcut over to Thunder Falls. We tested a few more hiding holes and found that the detector would trigger reliably even when in a hole or behind a rock.

That testing only took 30 minutes, so we decided to end the trip. As it turns out, Rita and Grace had just reached the top of the ladder when we started to climb. Everyone was out of the cave by 12:30pm.

The weather at the top was warm and sunny but rather windy. Seth’s tent has been blown partly over. After pulling up the rope and closing the cave, we changed to clean clothes and packed up the camping gear. Seth, Kristen and I were the last to leave the campground about 1:15pm.

It would have been nice to have a longer trip, but the stream level in Thunder River was just too high. I will make up another rescue cache for the Mapped End and plan another day for the trip.