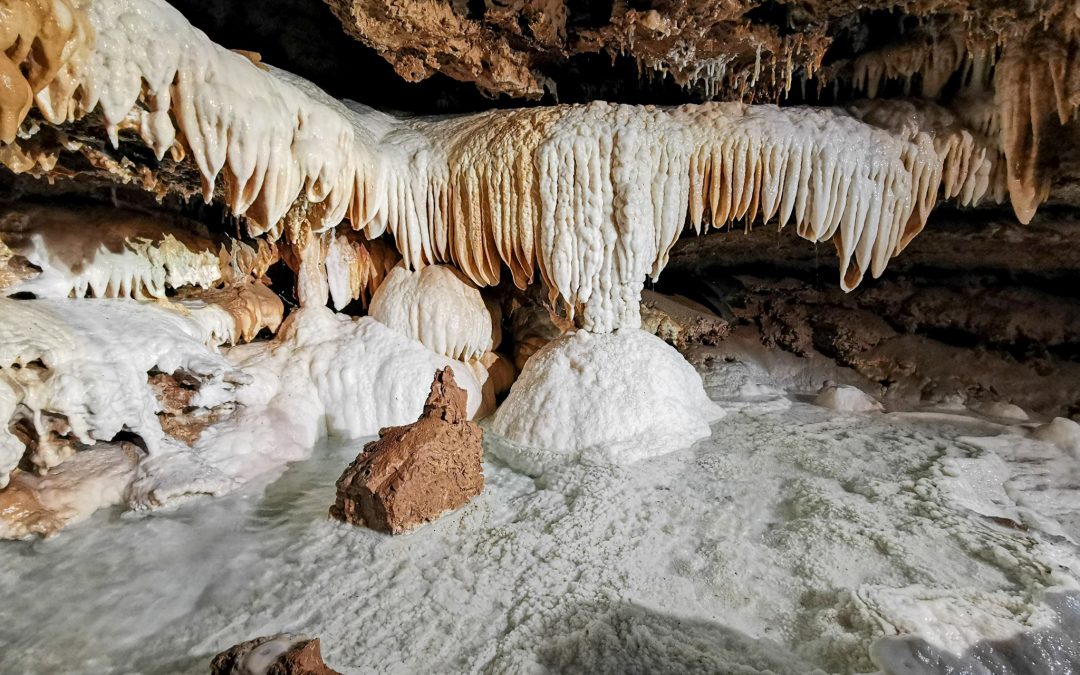 The weather situation for this trip was very dicey. We did not know what we were going to do until we got into the cave. The forecast for the night before the trip was for 1 to 2 inches of rain. Some rain did fall, but it was only 0.15 inches which is not enough to seriously affect the stream level. The daytime forecast called for showers after lunch. A shower did indeed happen, but less than 0.10 inch.

I camped the night before the trip. Everyone else came in the morning. We were all onsite by about 8:30am. We geared up and started down the shaft. John Roth was the first person down at about 9:15. Everyone was in the cave by 9:45. Everyone on the team was an experienced caver, so gearing up and rappelling down the shaft went quick.

The water level in Thunder River was up about 3 or 4 inches from normal. That is almost not noticeable. We had no trouble moving in the stream. We arrived at the Round Room about 10:45. Servicing the rescue cache took 15 or 20 minutes because we made a complete new inventory of everything in it. The added items included 9-hour candles, vet tape, a flexible cutting board to use as a splint, space blankets and triangular bandages to use as arm slings.

Leaving the Round Room shortly after 11:00, we continued on upstream past the Bone Room. We stopped for lunch about 11:45. That took half an hour. Finding our way through all the jumps and breakdown took a while.

We stopped at the Second Azure Pool where Hou took some photos. We also took photos at a formation area just a few hundred feet from the Mapped End.

Continuing on, we arrived at the Mapped End about 1:15. The water level in the stream there was five or six inches higher than usual. After placing the rescue cache, we tried going upstream through the crawlway and the first pinch. It was more water than we wanted to deal with. John did go through the first pinch and checked out a few hundred feet of passage beyond.

We left for the return trip a few minutes after 2:00. It went a bit faster, though we still had to search around in a few places to find the route. There are some reflectors, but more are needed.

During the return trip we stopped for photos at the UL2 formation area. From there we intended to continue on all the way to Thunder Falls. John was the only person who had not seen Thunder Falls. John and Martin detoured up to the ladder, so we did not get over to the waterfall.

Everyone geared up and climbed out. Hou was the last person out at about 5:30.

Although we did not get to the original goal of counting critters beyond the Mapped End, we did notice various biota. There were a couple of bat carcasses which still had fresh fungus. We photographed those. We saw fish throughout the entire length of the stream. On the return we saw two small salamanders in the river. They were too small to get a species ID on, but were probably grotto. We checked a few rocks and saw some isopods.

Along the way we saw three bat carcasses. Bats are rare in this part of the cave, so seeing a dead bat was unusual. All three had fungus on them. Seth took some photos which we will pass on to a bat expert.