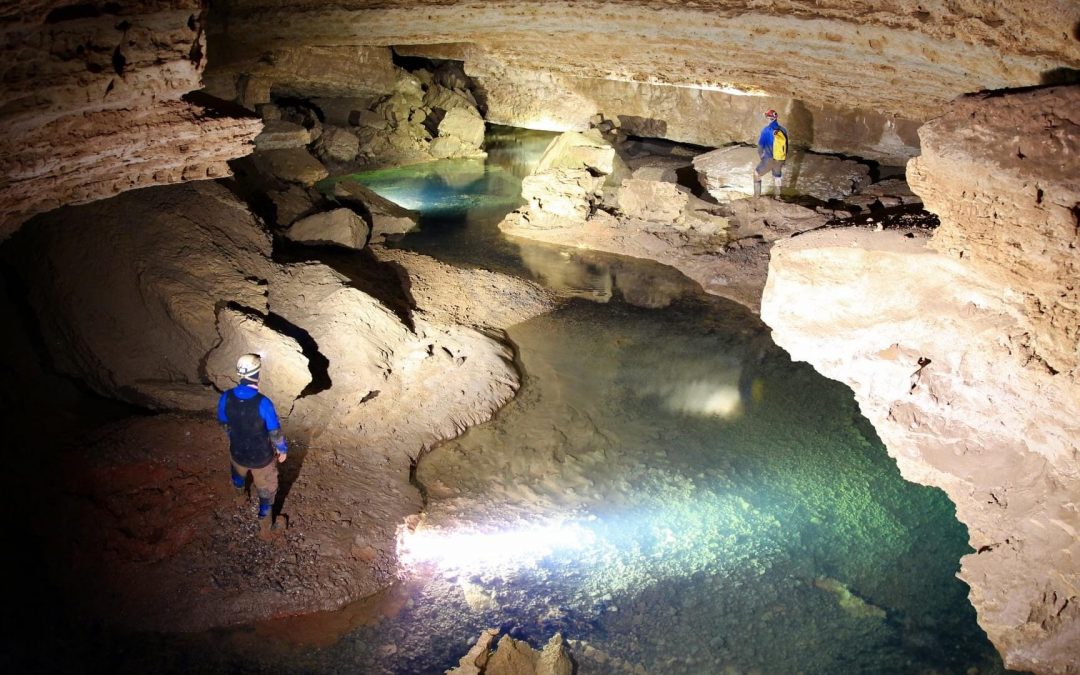 The permit was under Dan Lamping’s name but due to a last minute injury he was unable to participate.

We entered the cave on Saturday morning having everyone at the bottom of the hole by 10am.
Our objectives were to fix the tie-in of UL1 and mainstream, check a couple of things noted on the field notes, and then head upstream to the Round Room to get some better sketches, and add a cross section through the room.

We headed upstream to UL1. At UL1 we could not find any survey stations up on the mud slope or ledge. There is a brass pin in the ceiling near UL1 , but it didn’t appear to be tied into any survey that we knew of. Maybe it is, I would have to ask Bob or Dan about that. Anyway, we looked around for a good hour trying to find at least one recoverable station. We could not find any. They have either been washed away, or moved for photography reasons, as the one station we really wanted was in a formation area across from the UL1 entrance. We did run a survey line from NU22 to UL30 and then to the brass marker. Fixing the tie-in will have to wait for another trip. We will need to get a crew up into UL1. The safest way would be to bring in a small board to make the leap across more manageable. There is a handline there, but it’s probably at least 18 years old. That should probably be replaced as well.

While working on the UL1 tie-in, Josh got his drone out and was running it up and down the passage. It was a mostly successful flight, until it took a bath in Thunder River. No more drone for the day.

We then headed to the Round Room. We all split up at this point with Josh Brewer doing a new sketch of about 100’ of cave leading up to the room, Spike worked on the resketch of the Round Room proper, Tony worked on a cross section spanning the length of the room, Derik and Josh went farther upstream and started taking pictures. After I was done doing the cross section I headed to Josh and Derik’s location. Neither of them are very familiar with that part of the cave. I pointed out the Jeffco camp, UL3 entrances, boner balcony, and eventually took them up to the Bone Room to take a photo there.

After we took pictures we headed back to the Round Room. Josh Brewer was just finishing up and Spike was already done. We packed up and headed for the ladder, stopping briefly at UL2 to show Derik and the Joshs the formation area. None of them had seen it before. Would have been a cool place for the drone video …

We headed for the ladder and everyone was up and out by 7pm with no difficulties.

Everyone camped on the surface with the exception of Spike who met us at the silo Saturday morning. The weather was amazing for late July. Friday night we had a short window of opportunity to view the comet. Derik took a few photographs, and we lost sight of it, having seen it for a little over 20 minutes. Friday day I went for a very nice 15 mile ride from camp on my bike. Scored a nice picture of the bike at the natural entrance. The natural entrance has some new graffiti since the last time I was there in February.

Everything was locked up, turned off and everyone was off the property by 8:30 Sunday morning.