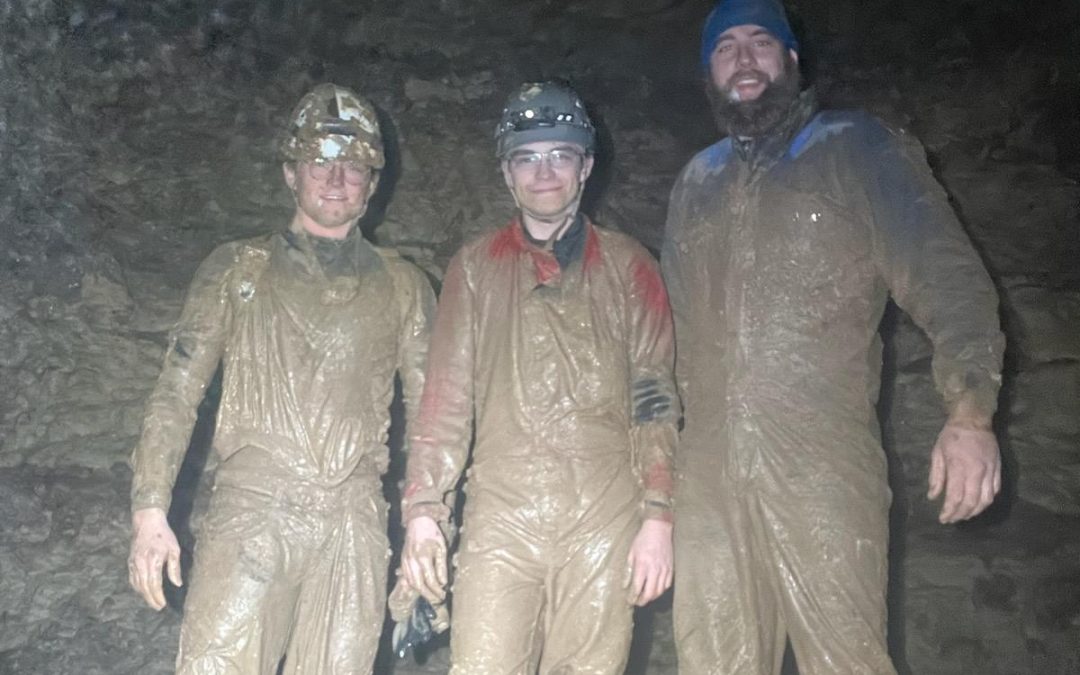 Ben Geisert, Logan Dowd, and myself were the first team to enter the cave on Saturday morning, dropping in at about 10:00. Our mission was to return to DL2, a lead off of Lower Thunder River previously surveyed by Alex Litsch, Cathleen Yung, and myself on the last survey weekend in August. We’d dug out a ~10 foot mud fill, breaking into small walking/stooping passage beyond. We stopped the survey as we reached the fill, so this was where we began this time around. Ben and Logan began setting stations and getting measurements, while I tried to wrap my head around the sketching. It didn’t take long before we got a good rhythm going, and began making our way down the passage. After we broke through the mud fill, the passage does a little U-turn, into a decent-sized room before generally continuing towards the west. At this room, there is a tight squeeze that cuts through the top of the U, while a wider, but still low passage continues into the room at the base of the U. We named this room the P Room, in honor of some bodily functions that happened there.

As the passage continues to the west, it continues in a similar fashion to before the mud fill – a mixture of stooping, walking, crawling, and belly-crawling following the meandering stream as it enters and exits the passage. The floor in this passage is entirely mud of the thick, boot-sucking variety that is so common in Carroll, and it was extremely difficult to keep my sketchbook clean. Logan, meanwhile, lost both of his gloves in the mud in the course of the day.

Progress was relatively slow, due to the consistently short shots, the ridiculous amounts of mud, and the slow sketcher. It took us a few hours to enter truly virgin cave, since Cathleen and I had scooped for a couple hundred feet after the dig last trip. At one point about halfway through the day’s survey, we had to return to the beginning of the survey to retrieve my garden trowel – there was a squeeze that had to be dug out about 1” more in order for us to fit through. We stopped for “lunch” at about 5:00, and morale, which had been steadily dropping throughout the day, had reached an all-time low. We were sick of this mud! We resolved to keep surveying until at least 8:30 before turning around. A few stations after this, we reached a tight crawl in the stream which continued generally in a straight line for about 50 feet, mercifully getting higher as it went on. As I sketched, I heard some excited noises from Ben and Logan ahead, and heard talk of a breakdown pile. I was excited to finally see something other than mud, but I had no idea what was in store.

I finished up the sketch in the low passage, and saw the base of a large breakdown pile ahead. As I climbed it, Ben told me not to look up until I was at the top. Once I reached the top – holy cow! It was a circular breakdown room, about 20 feet in diameter with a 10-foot high pile of breakdown on the floor. The dome above gradually narrowed as it got higher, but at the ceiling about 20 feet above the top of the breakdown pile, there was an approximately 8-foot diameter hole leading upwards into upper-level passage. The Disto showed that from the breakdown pile to the highest point we could see in the upper level was about 50 feet. Of course, the upper level was completely unreachable without a bolt climb, which would probably be a sketchy affair in Carroll’s crumbly rock…

As I sat on a big rock on top of the breakdown and started working on the sketch of the room, we decided that we’d get the dome (which we named the Shower House, due to the rain of water from the ceiling) sketched and then call it quits on survey for the day. We’d push the cave on further, to see what awaited the next survey crew, or to see whether the passage ended soon enough that we could finish it out today. Some quick math here told us that we’d gotten about 500 feet surveyed on the day.

After the Shower House, the character of the cave changes. The passages are far larger, with more rocks and less mud. After a couple hundred feet, we though we’d reached the end of the passage at a mud fill and prepared to restart the survey – however, we’d initially missed a slide to the right of the fill that dropped out into further passage. It wasn’t long before we passed another dome that led to upper level passage – slightly shorter and not as wide, but it looked to be a far easier path for a bolt climb. Around this dome, there was a couple hundred feet of true borehole passage – 10-15 feet wide with 20 foot ceilings. However, it didn’t stay this way for long – probably 500 feet or so from the Shower House, we reached a true breakdown room that blocked further easy exploration. There was a path on top of the pile that a small person could squeeze through and attempt to continue – I tried getting in, but it was sketchy enough and I’d have to move enough rocks to get through that I decided not to push it. Ben tried to push around the right side of the room, along a crevice through gaps in the breakdown, but sketchy rocks above and to the side caused him to terminate this exploration as well. At this point, we decided to call it a day, and made our way back through the miserable passage we had spent all day getting to know so well.

We rejoiced when we finally returned to Thunder River and got the opportunity to wash the many pounds of mud off of our bodies and packs. After some time sitting in the river resting and cooling off, we began the trek back to the ladder. A long, hard, but rewarding day of caving came to an end when we climbed the ladder and exited at about 11 PM.