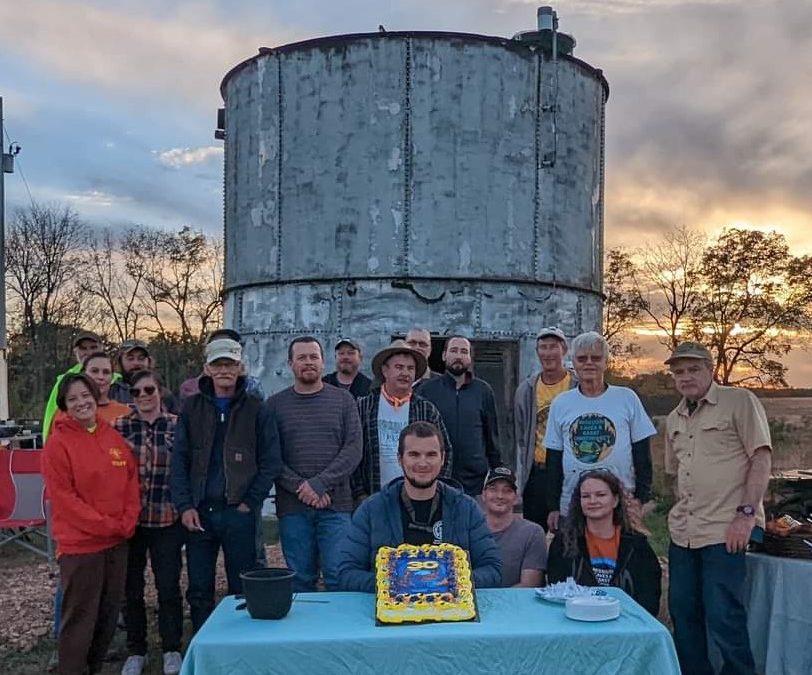 There was good weather, good caving, good food, and good conversation this past weekend during MCKC’s 30th anniversary at our newest acquisition, Carroll Cave. In attendance were the two men that started the MCKC 30 years ago, Don Toole and Doug Feakes (aka Digger). Shout out to Kirsten Alvey-Mudd and her helper, Adele Ayres, for making a banquet Saturday evening for everyone. Also a shout out to Tony Schmitt who showed up Thursday night to make sure that the porta johns were delivered on Friday. Tony also joined the MCKC board this same weekend and took up the mantle of MSS Rep and Membership Secretary. He is a welcomed addition to the board. He is filling the vacancy left by recently resigned board member Alicia Wallace whom had served on the MCKC board for over 24 years and was a strong influence in shaping the MCKC into what it is today. She also played a significant part in the creation of the Missouri Cave Plates program.

Several MCKC caves were made available for caving on Saturday. These being Carroll, Goodwin, Kieswetter, Skaggs, and Roubidoux. One trip led by Tony Schmitt went into Carroll, one trip went to Kieswetter, and one trip went to Roubidoux. Some folks stopped by Goodwin as well. Carroll Cave campground made for a good, central-ish location for visiting any of these caves.

Worth noting, “Get Er Dun Jons” out of Lebanon was the only place out of several that would deliver porta johns to Carroll. I contacted them at 417-533-3569.

We brought out MSM Grotto’s speleobox and squeeze box for some on-site entertainment as well.

All in all, a great weekend.