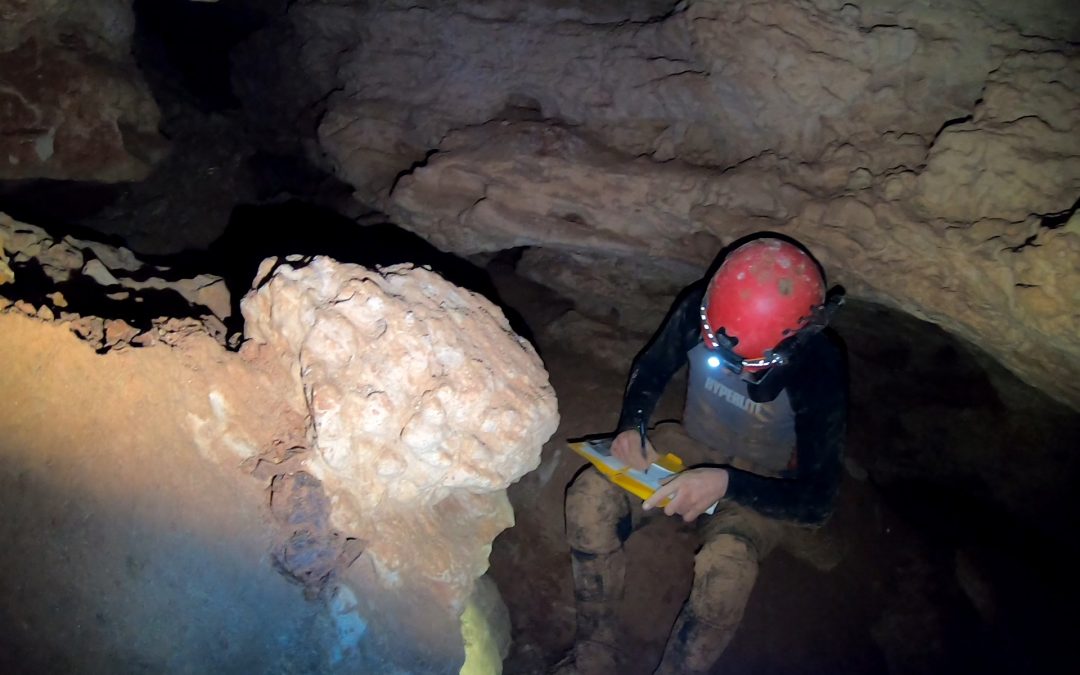 DL7 – Back to Bartertown

It had been a year since we last mapped (my first trip to DL7) in Bartertown past Push Camp. I had been eagerly anticipating a return to the end of survey at L51 in Tomorrow-morrow land. Tony Schmitt, Michael Bradford and I met up at the property early in the afternoon on Friday, with a light snow cover, to do some Distox calibrating and overall final prep for the camp trip. Eventually Ben Miller rolled in, as well as Cathleen Yung, Seth Colston, Joe Sikorski and last but not least, Isaac Smith. Ben Geisert, Derik Holtman and Logan Dowd also arrived to camp on the surface for their day trip. We entered in 3 separate groups and got settled into Jerry’s Cairn by 10:30 p.m. or so with the goal to get up at 7:00 a.m. to roll out to Bartertown!

Joe, Michael, Isaac and I rolled out around 8:45 a.m. and we made good time reaching push camp in just over 2 hours and we were at the end of survey an hour later, after taking a quick break to drop off some things. The only perilous part of this trip was the crossing of the pit that stopped Joe’s team so many years ago. I crossed first, the mud banks held and the others quickly joined and we made our way to the end at L51. What lied ahead was the top channel of a deep narrow canyon. The top of this passage was nice and wide, varied from 10-20 feet in some areas, and 2-4 feet high on average.

As survey started, I took point, Isaac shot front and Bradford stayed with Joe to do splay shots as we were Distox heavy on this trip. The narrow canyon that was prevalent in this area, was constantly cutting back and forth across the passage, or disappearing behind the walls and going completely out of view. Boxwork was noticed in the ceiling again. The red clay floor was dry with a sandy coating and small bat bones could be seen scattered about from time to time. After a few shots I came to a breakdown pile in a wide area of the passage where the canyon disappeared into the left wall Isaac would check this out and confirm a loop. The breakdown was very unstable, but fairly large pieces and slipping up into the room I could see It was just a collapse and nothing more. The canyon appeared to skirt under the rubble in some areas.

To the left of this pile, the ceiling dropped down and the passage continued past the breakdown, 10 feet wide and came to a hole in the floor where the canyon came back into view. Isaac popped out of this minutes later proving that the canyon was one in the same from just before the breakdown. The passage continued on 20’ wide with the canyon taking a hard right turn and disappearing behind the right wall and under some breakdown. The survey continued on through a narrow point in an otherwise wide passage and led straight to a wall of breakdown that appeared to end the show.

Upon reaching the wall, it was one giant slab, 4 feet thick, that fell out of the ceiling and landed on the floor. The slab was tremendous and probably 20 by 30 feet. The cave really appeared to end but I found a hole in the breakdown on the far side where the canyon came back into play. A couple slabs of breakdown had to be stabilized and sent below and the survey continued on into the canyon, as we have now lost the easy going upper channel. At this point we surveyed into the canyon, then I had to drop down 20 feet below into the stream, climb back up where it was wide, and I found a larger area where it appeared the wide upper passage came back into play. We managed to shoot a straight shot through the top of the canyon, avoiding the roller coaster ride, then everyone came through this crawl atop the canyon. We were now in a junction where several canyons appeared to merge, and 2 main passages continued at the ceiling.

I chose the left fork first and we surveyed right into a breakdown room with a clean washed canyon below. In the ceiling of this collapse room was another side dome collapse that went up approximately 15 feet above the station at the entrance of this room. Once again, in the breakdown, on the far side of this room, the canyon continued on and I was able to move a boulder out of the way and slip in under a wall of death. Unfortunately, the cave abruptly stopped 2 shots later as red clay and sediment had been washed in at the ceiling level, filling in the entire area. A channel had been excavated through the fill but it was too short for me to fit easily and up ahead I could see it getting much tighter. In the wall of the sediment was a leg bone of some kind, about 4 inches long. We were going to bring it out for ID but it snapped in half as soon as I touched it as it was too brittle. It is possible that it was a raccoon or possum bone of some kind.

The canyon did continue below and I was able to gain access in a wide part but the canyon immediately became too tight for travel and the stream continued feeding in from the unknown. It is noted where I previously stated that I slipped down a canyon through a roller coaster ride, there was a 1’ deep pool of water at this point. If canyon exploration is ever done in this area, this would be a very viable water source, just follow my tracks downward!

We retreated back to the junction and it had been 4 hours since we started surveying. We decided to keep going and at least see what the other fork does. Bradford explored the lower canyons in this area and found several coming together, which was likely the two canyons we were looking at the top of.

Survey continued and we got into some wide passage again, canyons cutting across with sharp meanders and sinuous passages. The upper level remained low and wide with flowing red sandy clay banks. After a few shots the cave took a hard left towards some rather large breakdown boulders and some very thinly bedded breakdown. After the survey caught up I slipped through the thin bedded breakdown into a terminal collapse of thinly layered shale/clay layers. The room was about 10 or 12 feet high, 10 feet wide, sloping upward, and there was nowhere to go but out. It felt like a death trap and I wanted out instantly. This was the end as the canyon just before this was too tight to enter, and the collapse in all reality probably filled the canyon up below; however, this is just conjecture.

We wrapped up survey, packed our gear and made sure we checked every lead. Tomorrow-morrow land was done after approximately 480 feet of survey and approximately 27 shots. It took us 22 minutes to get back to our cave packs at L51, the beginning survey shot. From there it took another hour to get back to push camp as Joe and Bradford missed a turn and went to the end of North Bartertown. We probably took an hour to cook our food, refill water and head out from push camp. We only stopped to pack up another tarp that we found wrapped around a boulder from a flood that washed away a lot of gear at push camp so many years ago.

Leaving Push Camp at 7:40 p.m. we reached Horseshoe Falls at 9:45 p.m. where we promptly got cleaned up under the waterfalls. I was covered in clay, sand and mud and it was inside my clothes and I was flat out slimed. I was able to wash all this grime off so I would be able to be clean back at camp, and it was a very refreshing cooldown at the end of the day of being hot from the fast travel.

We arrived back at camp and chatted with Tony, Ben and Cathleen before turning in for the night. In the morning we all took off in various stages and I exited the cave around 9:20 a.m. with the last person being out with all gear hauled out by 1:00 p.m. During the haul we had to park Tony’s truck at the doorway to mount a pulley on his bumper as a deviation for the haul line due to the newly built fence surrounding the campground. I also used a 4:1 jigger to set the tension on the pulley above the pit to keep the rope centered.

Later I learned that Logan Down, Ben Geisert and Kohl Mitchell pushed the newly opened dig in DL2 to some nice cave with around 500 feet surveyed.