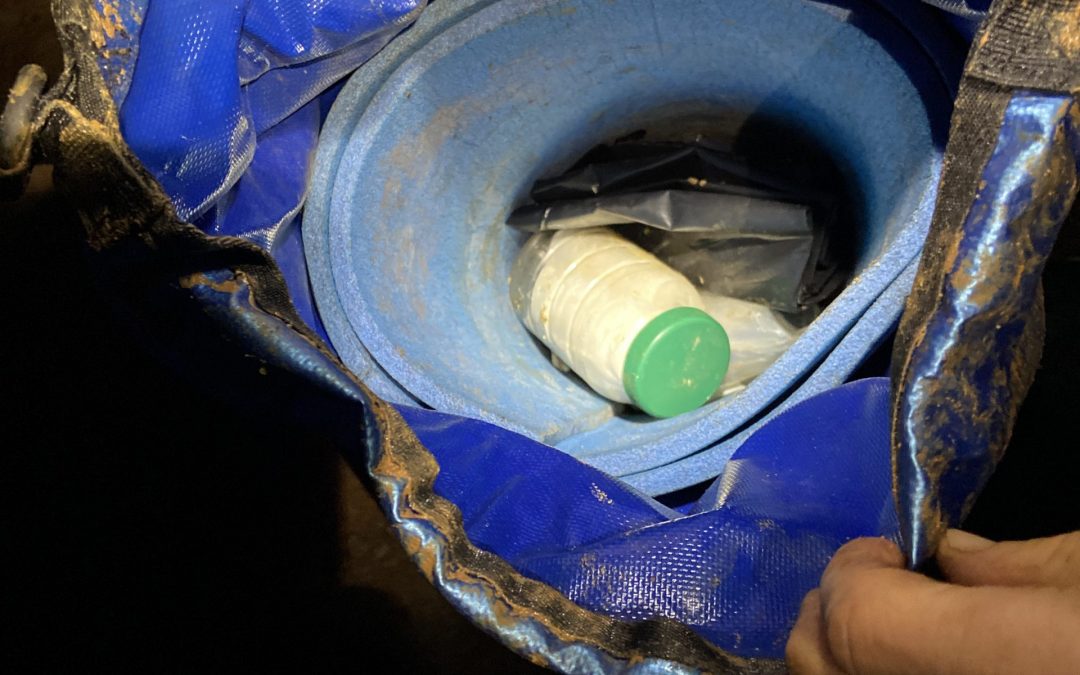 This trip was originally planned to be a training session for Seth and Kristen. I wanted to show them the route to the Round Room as part of their trip leader knowledge. We were also going to use the trip to test some light detector systems. At the last minute we added another goal, which was to inventory the rescue cache at the Round Room.

The four of us met at the silo shortly after 8:00am Sunday morning. Gearing up and getting down the shaft was straight-forward since all of us had been there, done that. We were all in the cave by 9:10am.

We immediately set off to upstream Thunder River heading for the Round Room. It was a relaxed pace with Seth and Kristen leading. Just before the Rock of Doom I placed a light detector behind a rock. We picked it up later on the way out of the cave.

We paused for a bit of sight-seeing at Flat Rock Falls. I pointed out the entrance to UR1 and described the passage a bit.

We arrived at the Round Room a few minutes after 11:00am. Seth and I went up the slope to the rescue cache and took an inventory.

The cache is in a roll-top bag of perhaps 30 liters capacity. When we got to it, I discovered a note that I left the last time I was there … January 2013! The note was in a ziplock bag and was completely soaked. Good thing I used Rite-In-The-Rain paper. The cache is almost at the ceiling of the room, at least 30 feet above the stream level. As far as I can tell, it has not flooded that high in many years.

10 trash bags.
Two partial rolls of toilet paper, in a plastic bottle.
A small pot and lid, perhaps one pint capacity.
One piece of closed-cell foam about 20×40 inches.
Two cans of Sterno fuel, wrapped in a plastic veggie bag and then inside a quart Ziploc. The labels were pretty well ruined by water, but the cans appeared otherwise intact.
10 votive candles

We removed: Two non-functioning cigarette lighters. They were in a plastic bottle along with trash bags, and then inside the roll-top bag.

There is a lot of unused space in the roll-top bag.

The cigarette lights we removed have failed strikers. They still have fuel and will burn if you light them with something else. The strikers will not turn, so there is no way to get them to light.

Seth took photos of everything.

Everyone had lunch in the Round Room. Seth went back toward the ladder a few hundred feet and placed another light detector behind a rock.

We started the return trip about 12:15pm. When we had passed the hidden light detector, Seth went back and retrieved it. I retrieved the other light detector when we passed it. I will look at the data from both to see how well they detected our passing.

The trip back to the ladder went quickly. We arrived there a few minutes before 2:00pm. Everyone geared up and climbed out. We were all out of the cave by 2:30pm. We removed the rope, locked everything up and were on the road by 3:00pm.

The trail marking reflectors in all of the Upper Thunder passage need to be visited. Some are missing, some are in the wrong place and some have accumulated a mud coat which needs to be cleaned off.