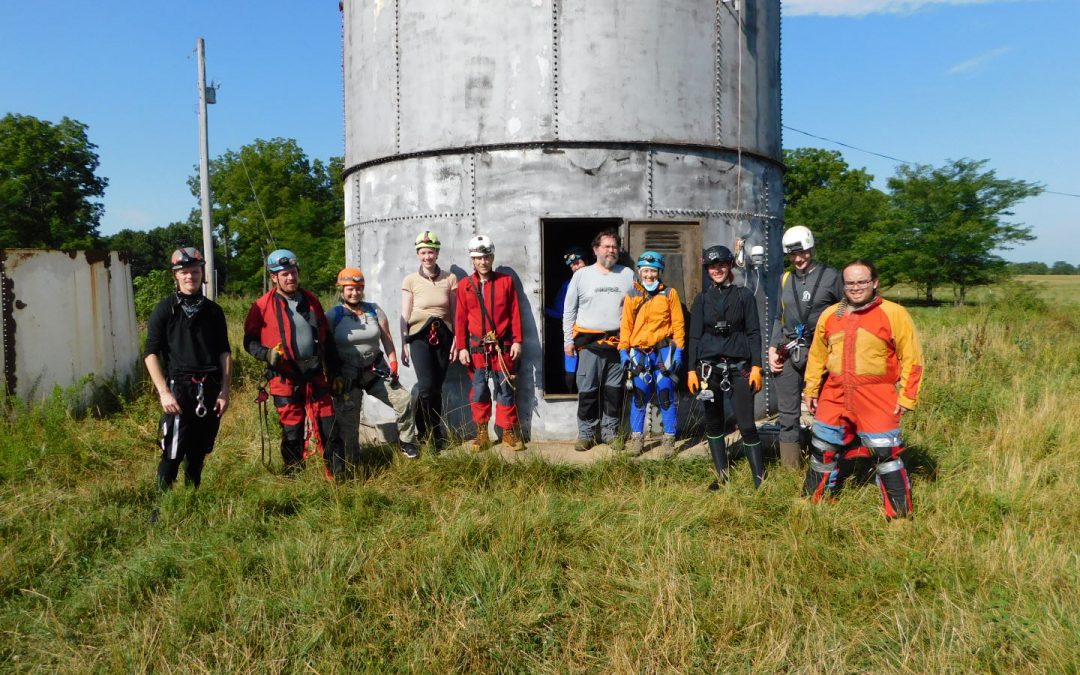 This trip was originally planned to be just a data logger service trip. The goals changed and evolved, especially in the two weeks leading up to the trip. Even on Saturday morning no one was completely sure who was going to be there and what the teams would be. By the time everyone got there we had three goals:

1) Download the data loggers.
2) Inventory the rescue cache at the Round Room.
3) Test the light detector devices that Jim Cooley and I have been working on.

I arrived Friday late afternoon to camp. Jay and Nick Kennedy, Seth Colston and Martin Carmichael arrived over the next few hours. I hung a rope in the silo so that Jay could do some vertical practice work with Nick. Martin and I also used the rope to check out Martin’s climbing system.

Saturday morning I was up early for some exercise. The remaining participants arrived between 8 and 9 am. Jim Cooley also came, but since we had plenty of people he did not participate.

We had a surprise with Kayla Heady. Apparently Martin had read one of my emails wrong and assumed that “Kayla” meant Kayla Heady. It was really Kayla Rosen. Martin contacted Kayla Heady and told her he was glad she was on the trip. Kayla Heady was a bit taken aback, but decided to get some caving in and so showed up. Surprise! I had her sign a waiver and managed to find a seat harness she could use. Martin will take care of her membership dues and application form.

With eleven people plus a few guests (Jim Cooley and Melissa’s husband Dheeraj), it was a circus getting everyone outfitted and ready to cave. We eventually did get everyone ready. After a group photo, we started sending people down the shaft about 10:00 am. It took a while. We were all in the cave by about 11:20am.

At that point we finally decided who the teams would be. Rita and I went with Jay and Nick to inventory the rescue cache in the Round Room and to place some light detectors for testing. Everyone else went with Seth to download the data loggers. On the way upstream I planted one of the light detectors behind a rock.

My team had not got more than a few hundred feet when it became obvious that Jay was having problems with balance. We spent 15 minutes on a section of cave that normally takes about 3. At that point Jay decided that his balance problem was not going to go away and he was not able to continue. We were not far enough upstream to have got in the water. Rather than try to go back overland, I led the group down the river to an easier way up to the ladder. We were back there about 11:45. Jay and Nick geared up and climbed the ladder while Rita and I stuck around at the bottom just in case they needed more help. They were out of the cave about 12:15.

Rita and I decided to have lunch and then go find the other group. Before I ate, I went down the cave a few hundred feet and hid one of the light detectors that Cooley and I have been working on. We were about half-way through our lunch when Seth’s team returned. They all had lunch. I retrieved both light detectors for later analysis.

We left for the UL2 data logger about 12:45pm. It was a fairly normal trip until we got almost to UL2. Tyler had not expected to get wet and so was not wearing his wetsuit. He had a serious chill going. At the UL2 entrance, Rita got him a heat pack and balaclava. Seth and I and a few others went on in to UL2 so we could download the data logger. It was a quick in-and-out trip. We did not stop to view the formations and did not go on to Convention Hall.

Back at the UL2 entrance Tyler was suffering. We decided that the best thing to do was get him moving. I took the lead with Tyler following, and we made a light-speed trip back to the ladder. Moving that fast helped him a lot, though he was still cold. Surprisingly the rest of the team was only 5 minutes behind us even though I set a blistering pace to warm Tyler up.

We were back at the ladder by about 2:30pm. The last data logger, located below Thunder Falls, still needed to be downloaded. Everyone trooped over there. While Seth did the download, the others took photos.

Back at the ladder, we all got geared up which was a much more organized process this time. Tyler, Kayla Rosen and I were the first three out. The rest of the team followed. Everyone was out of the cave by 4:00pm. We changed clothes and chatted for a while.

I took some notice of the state of Bill Pfantz’ campsite. His camper and old diesel pickup were gone. The boat and a LOT of trash is still there. We noticed that there were three lawn mowers on the site. It would have been handy to have one to knock down the grass right around the silo. We grabbed all three for later inspection. It is possible that changing the gas and oil, sharpening the blade and installing an air filter will make one of them work. Martin is going to look at that the next time he is down.

A quick analysis of the data logger data showed only minor floods since the middle of January 2020. The highest flood was 3.2 feet in Thunder River at the ladder. Compared to other events, that is not a major event. The stream was up perhaps 2 or 3 inches from normal, and we had no difficulty navigating.

The light detectors were set to different sensitivity levels. The detector I placed in Carroll Passage was set for MAX sensitivity, and the other was set for HIGH. The MAX detector successfully picked up passage of the group as they returned to the ladder. The HIGH detector did not pick up any passing light. Saturday evening I reprogrammed both detectors to use MAX sensitivity. We will deploy them again tomorrow (Sunday) to get more data.