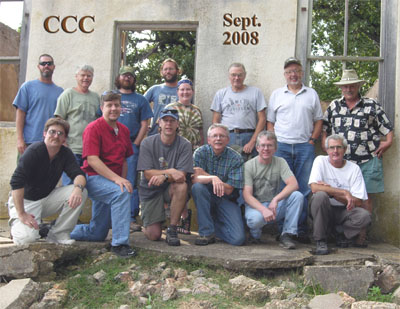 The Annual Board and Members Meeting was held at the Sweatt Schoolhouse.

President Randy Brugger called the meeting to order at 11:00am.

The minutes of the previous meeting were not available to be read.

There was no vice-president’s report from Spike.

Preliminary maps were brought by Tony Schmitt showing the natural entrance area and the area from the Water Barrier almost to the ladder. Other maps are in progress though not as far along.

The mapping team has discussed among themselves how to count the total length of the cave. They have decided to follow MSS standards on this by not counting splay and perimeter shots. On this basis the survey shows 16.45 miles. Including all shots it is a bit over 18 miles.

About 10% of the survey is drawn and about 50% is assigned to someone to draw. The entire team is using Xara to do the maps. They are using mostly MSS symbols.

JPG files of the working maps are available on request.

Bob Lerch has all the master data. All survey notes have been scanned and are stored in digital form on Mike Freeman’s work server where they get backed up.

The survey has not yet gone past the Lake Room.

Ben Miller prepared and sent to Randy Bruegger a report and CDs detailing progress made on his dye tracing project. Randy passed these out to all interested persons.

Jeff Page reported on the Web site process for requesting permits. The new process is working well. They have condensed the trip permit and the trip register into a single page document.

Trip reports can be submitted on the Web site.

The silo door combination does not change. The key safe combination is changed every now and then by Bill Pfantz who reports the new combo to Jeff Page.

Jeff Page suggested that CCC ought to create and implement a gear decontamination protocol. He also suggested dedicated gear for Carroll Cave trips. There was some discussion about forming a committee to make a recommendation. A suggestion was made to use the USFWS protocol which is widely available.

A suggestion was made to check the bats closely during several fall trips. Bill Gee will see how much can be done while planning for the guano gauge monitoring trip.

An update was given to Greg Fry regarding White Nose Syndrome, where it started and why it is a major problem. Maps were passed around showing the progress of WNS and major bab population centers.

Questions that came up: How do we monitor the bats? Can we take soil samples and have them analyzed for WNS fungus? NSS has said only scientists should take samples for fear of accidental contamination.

A motion was made to appoint Jeff Page to be WNS coordinator. Terry Defraites moved and Spike seconded. The motion carried on a vote.

Mike Hartley reported that nothing much has happened for several years. Mike is no longer able to personally lead trips. Activity that has no other logical place could be recorded as “Conservation”.

There was discussion about cleaning up trash around the schoolhouse and the silo. Spike offered to have a roll-away brought in, but others thought the job can be done by available pickups and flatbed trailers. Mike Hartley will set up a cleanup weekend.

Rick Hines reports 76 paid members for 2009 so far. This is a bit more than last year.

Rick suggested changing procedure so that a member who lapses and then renews keeps their same member number. After discussion it was decided that since Rick manages the membership list, he can handle that however he wants.

Jeff Page commented that about half of membership renewals happen within a few days of going on a trip. This is a continuing problem. So far no one has been denied access to the cave, but it might happen.

There was discussion around the yearly renewals and requirement to sign a new release form. Several ideas were advanced included 5-year release forms, lifetime forms and release forms on the trip registration form. Rick Hines will start an email discussion among the Board of Directors on this issue.

Bill Gee reported on status of the Biology project. Most trips are for monitoring the cave – that is, counting what is found in certain areas. The trips try to revisit certain areas on a regular basis, but that is not always possible due to lack of participation.

Bill Copeland commented that CCC has a basic water quality monitoring kit. He will provide it to Bill Gee.

Eric Hertzler asked if we can collect more data about where fish are found. Is it turbulent or still, silty or clear, rocky bottom or mud, etc? This might help to determine what kind of habitat the fish like.

Craig Hines asked if there are any endemic species in the cave. There was considerable discussion about it. Jim Helwig commented that taxonomy is done by very few people now and it is nearly impossible to get them to look at anything. Identifying an endemic species would be very useful in obtaining grants for further research and watershed protection, but it is a steep hill and will take many years to climb.

Terry Defraites mentioned that safety training for trip leaders will be held at the silo after the meeting. All are welcome to attend.

There was some discussion about the requirements for being a trip leader. The current requirements are 5 trips in the cave and attending the trip leader safety training. No decisions were made about changing this.

Terry warned everyone that Carroll Cave is known to flood to the ceiling in several places. This has been confirmed by stream level data. Everyone needs to pay attention to rain events when planning or attending a trip.

Bill Gee passed around a graph of the full-year data for 2008. The rain gauge logger is currently out of commission. Eric Hertzler offered to donate an unused rain gauge and also to ask his father if we can place a rain gauge on his land. This is located just south of Montreal near the hunting store.

Everyone admired the flat roof on the school house. Several brief showers came through during the meeting, but since we were under the roof we did not have to do anything to stay dry.

Terry Defraites said the roof is holding. He thinks by summer 2010 we might have enough money to build the real roof. Materials cost is estimated at $2500 which is mostly shingles, tar paper and decking.

Fixing up the windows is easier and cheaper. Bill Copeland can get glass and knows someone who can build sashes and frames.

The porch needs work. Discussion of what to do aobut it. Best thing seems to be building a foundation around the outside of the existing structure, then pouring a whole new porch capturing the old porch under it.

A question was raised about the cost to run electricity to the site. Bill Copeland will look into it.

Marty Griffin reported on the status of the Web site. It gets about 200 to 300 hits per week. Marty covered some basic mechanics of updating the site. Anyone can post trip reports, and with a login/password can also post photos. Logins and passwords are available on request from Marty.

There was discussion about photos. Eric Hertzler commented that it might be better to use photo sites such as Flikr and merely link to them from the CCC Web site.

The trip report submission page and membership application page are really both just emails. A message is sent to both Marty and Jeff Page who then take care of the request.

A question was raised about the status of the cave radios. Randy Bruegger commented that both radios are now in the hands of Earl Hancock and John Kessler who are performing maintenance. If anyone wants to use the cave radios, John and Earl will help with arrangements.

Rick Hines asked for a big “Thank you” to Greg Fry for letting us visit his cave and land – and also for bringing the snacks!

Rick Hines nominated Tim McClain for honorary membership in CCC in recognition of his extensive knowledge of the cave and past work exploring it. Second by Jeff Page. Randy Bruegger spoke in favor. The motion passed on a vote.

There was discussion about another landowner trip. Several people have indicated interested but have not been able to attend previous trips.

Rick Hines has an 18 foot diameter fiberglass dome broke down in pieces in his yard. This dome can be made into two hemispheres and belongs to CCC.

Rick Hines commented that the Missouri tax exemption for CCC has been renewed.

There was discussion about going ahead and drilling a 10 inch hole into the DL7 intersection using the existing radio locate. Having the hole would allow long survey trips to be resupplied from the surface, increasing safety and comfort. Cost would be in the range of $500 plus a suitable well cap. Greg Fry has no objections.

Tony Schmitt commented that the survey team knows how to spend several days in the cave and would probably not use the resupply hole even if it were available. If a need arose the hole could be drilled in a matter of a day or two.

In the end there was no decision taken on this.

Rick Hines commented that he talked to Chris Danuser over a year ago and came to a verbal agreement on the sale of land around the sile. Chris’ attorney nixed the deal and since then there has been almost no contact with either person.

Jim Helwig reports there has been little action regarding recharge area protection. He related some experience he had with a similar project around Springdale, Arkansas. These projects cost much money and a partner would be needed to share the cost. This is a very long term project for CCC.

Spike reported that Missouri DNR is changing to a non-degradation policy on surface streams. Underground streams are not as regulated, so their protection status is less certain.

CCC thanks Bob Lerch for representing us at MSS meetings.

The meeting concluded about 1:30.